Originally the Campsite Booking API project was a coding challenge for a developer position I applied to at Upgrade Inc.. Back then, in 2018, the coding challenge was followed by a series of interviews, but in the end, I didn’t receive an offer. I recently revisited this project, and in this post, I go over the various improvements and new features that have been implemented.

The initial task was to develop a Spring Boot-based REST API that meets the system requirements outlined in this README. In 2019, I switched from Java software development to DevOps and worked in this field for a year and a half. During this period, I mainly developed and maintained CI/CD pipelines using Jenkins and Azure DevOps. So when I came back to this project two years later, the main goal was to complement it from a DevOps perspective, particularly containerization and CI/CD.

Let’s look at what was accomplished in more detail. The source code is available here.

Whenever I code, either work or my pet projects, I always strive to produce clean, high-quality code. One of the tools I use to write better and safer code is the SonarLint plugin, which helps detect and fix code smells, bugs, and vulnerabilities while working in IntelliJ IDEA.

In case you want to enable continuous code inspections within your development workflow, you can use on-premise SonarQube. Previously, the on-premise option was the only option from SonarSource. But they recently offered a cloud-based option called SonarCloud, which is free for public projects. So I decided to enrich the project’s continuous integration workflow with SonarCloud scanning.

For an initial GitHub integration with SonarCloud, you can follow this getting started guide. To integrate this Maven-based project, I made the following changes to the pom.xml file:

To exclude certain Java classes (like DTOs or model classes) from scanning, you can use a set of sonar.issue.ignore.block properties. Excluded classes must be annotated with a Generated annotation, for example, lombok.Generated, javax.annotation.processing.Generated etc.

After generating an access token in the Security section of My Account at sonarcloud.io, you can launch the scanning with the following command:

The SonarCloud scanning revealed some code smells and vulnerabilities. After fixing code smells, I addressed the main vulnerability, which was detected in the BookingController class: persistent entities were used as arguments of @RequestMapping methods. I overlooked this during the initial implementation, and it was corrected by replacing the Booking persistent entity with the BookingDTO object. Also, I improved the test coverage, which is now at 89.1%.

Another significant improvement was UUID’s introduction for the Booking entity while keeping the database’s ID. The main advantage here is that entity’s unique ID can be created without connecting to the database. You can read more on the pros and cons of using UUID vs. database ID in this Stackoverflow thread.

Additionally, the following adjustments were made:

I used a multi-stage build approach to implement the Dockerfile. With this approach, a Dockerfile consists of different sections or stages, each of which refers to its own base image. In my case, the Dockerfile has two stages. The first stage, or builder, is based on the maven: 3-jdk-11 Docker image. At this point, the project is built and packaged into a JAR artifact using the mvn package command.

The second stage is the stage when the actual Campsite Booking API Docker image is built. It’s based on OpenJDK’s buster-slim image.

When building the image, the user that will be used to run the image defaults to root. The step-down from root to a non-privileged user campsite is done during the execution of the docker-entrypoint.sh.

The Docker Compose file consists of two services. The db service is based on the mysql:5.7 Docker image. Since its configuration contains the ./mysql/initdb.d:/docker-entrypoint-initdb.d volume definition, the mysql/initdb.d/init-campsite-db.sql file will be executed when a container starts for the first time. This script creates the campsite database and the campsite user with all necessary privileges. The database data is stored outside of the container since the /var/lib/mysql directory is mapped to the named volume db-data defined in the volumes section.

The api service is based on the build context, which is the project’s root. Alternatively, you can use an image published on Docker Hub, for example, ibaiborodine/campsite-booking:latest. To do this, comment out the build config option and uncomment the image option.

Since the depends_on option does not wait for the db service to be ready, that is, when the campsite database and campsite user are initialized, I added a delay that is configurable through the WAIT_FOR_DB environment variable. The wait is triggered by the following condition in the docker-entrypoint.sh:

The original CI workflow was implemented using Travis CI, a hosted continuous integration service. This workflow was relatively straightforward and only consisted of executing the mvn clean integration-test command triggered by any commit on the master branch.

So far, I have had experience developing pipelines using Jenkins, Travis CI, Azure DevOps, and Bitbucket Pipelines. Since 2019, GitHub offers support for full-fledged CI/CD pipelines, free for public repositories. Therefore, I decided to use GitHub Actions for re-implementing the project’s CI/CD.

For this project, I adopted the trunk-based development as a source-control branching model. With this model, all development is done either by committing directly to the trunk or through short-lived feature branches merged to the trunk using pull requests combined with the automated builds. Also, the master branch is meant to be deployable at any commit. With all this in mind, I developed the following GitHub Action workflows: Build Master Branch, Build on Pull Request, and Perform Release. 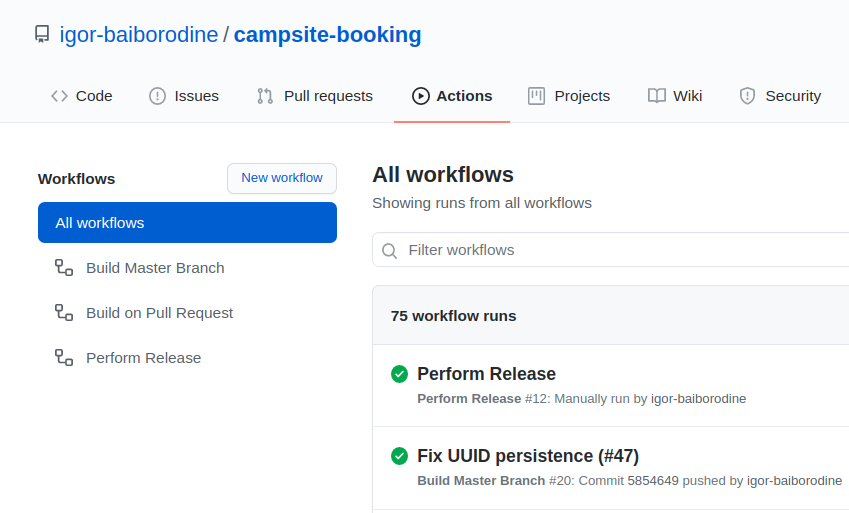 This is also an automatic workflow, and it runs whenever a commit is pushed to the master branch. It contains the Snapshot Publishing job, which will package a snapshot JAR and upload it to the GitHub Packages, and the SonarCloud job.

This is a workflow that is triggered manually whenever the code in the master branch is ready to be released. It contains two jobs: Maven Release and Docker Image. The Maven Release job performs a release and uploads produced release JAR to GitHub Packages. Its successful completion is a prerequisite for the Docker Image job’s subsequent execution when the Docker image is built and uploaded to Docker Hub.

The Release Version parameter value should be provided before executing this workflow: 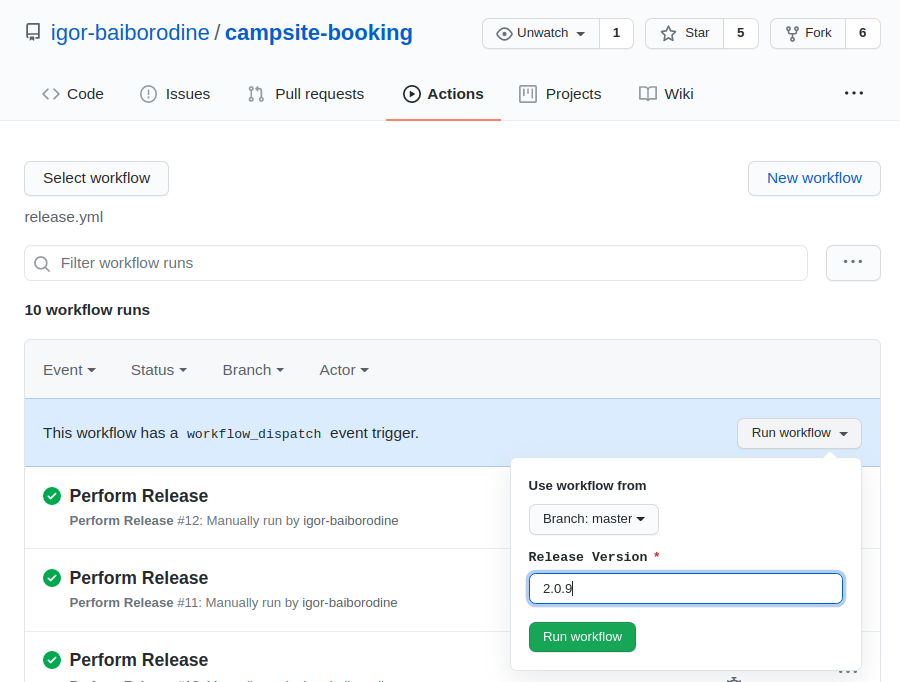 And in conclusion, I want to say that coming back to the project after two years and working on it again was quite refreshing and enjoyable. After improving the existing code base and adding new features such as containerization and CI/CD, the project is now more robust and complete.